Ambulance driving - depicted on a cigarette card as nice and clean!  The reality was different - driving in mud, ice, rain and  from desert to sub-zero temperatures carrying horrifically wounded men.  Janet Lois Griffiths was killed when her ambulance was struck by a train as she helped others out of the stricken vehicle but could not save herself. 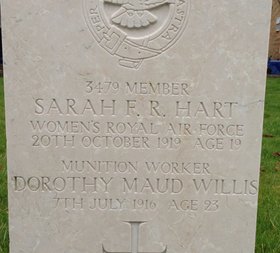 There was almost no role that women did not serve in during the First World War.  In the War Front's medical services, they were:

They served on hospital ships, hospital barges and hospital trains.

They served in every theatre of the war - in France, Belgium, Russia, Serbia,Greece, Egypt, Mesopotamia (now Iraq) and India as well as in Germany in the post-war Army of Occupation.

One British woman even served in the Serbian army, rising to the rank of sergeant major during the war and, post-war, to major.

Women served extensively in the British army, navy plus the air force and were bombed, wounded, gassed, shell shocked and killed.

Women at the War Front

Wherever the war was fought, there you found allied women serving the war effort.