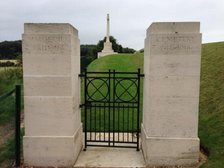 Letter to the Uknown Soldier

As part of the 1914-18 commemoration, people have been invited to write a letter to the Unknown Soldier, prompted by the statue to an Unknown Soldier at Paddington Station.

The inspiration for Viv's Letter came from her wanting to tell the soldier himself the story behind the creation of the myth of the Unknown Warrior in a way that might entertain him, by adopting the ironic tone used by so many soldiers of the day.

Viv's Letter was filmed in the British Cemetery at Maroeuil near Arras in France.  Note the unexpected participation of the horses in the adjacent field, who seemed to know something interesting was happening.  Another irony here is that these horses were volunteers, unlike the many thousands which were 'conscripted' into war service, as Viv says in her Letter.

Maroeuil Cemetery is the final resting place of Charles Hopkinson, brother of Beatrice Hopkinson, whose diary is featured in Nursing Through Shot and Shell.

Discover more about the 1418Now organisation and the Letter project.