Allied women showed considerable bravery.
The British popular press even demanded to know  -  Why not VCs for women? 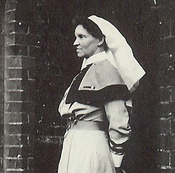 Vicar’s daughter Kate Luard (1872-1962) was a member of the élite Queen Alexandra Imperial Nursing Service (QAIMNS).  One of the first nurses to arrive in France on 20th August 1914, she had already seen service during the Boer War.

Kate’s letters written between 1914 and 1918 take us to the heart of the nurses’ war.  Eager to embrace new challenges, she was excited at the thought of nursing on hospital trains but cursed the impracticality of nurses’ uniforms when ‘clambering from coach to coach while in motion by way of the footboard’.  She was noted for her courage whilst working in Casualty Clearing Stations where men with unimaginable wounds arrived from the battlefields.

She was twice mentioned in dispatches “for gallant and distinguished service in the field”. She shares with Florence Nightingale the rare distinction of being awarded the Royal Red Cross medal 1st class and bar. There is a ward named after her at Basildon Hospital in her native Essex.

You can read more about Kate and QAIMNS nurses in We Also Served: The Forgotten Women of the First World War and Nursing Through Shot and Shell: A Great War Nurse’s Diary.  She also features in the You Tube presentation We’ve Nursed Like This Before - Improvisation and Dedication 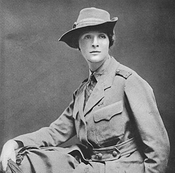 Born into a life of privilege Yvonne FitzRoy (1891-1971)’s father, Sir Almeric was a high-ranking civil servant. Before the war she had never really done a day’s work.

With some Red Cross nursing training behind her, she volunteered as an auxiliary nurse with the National Union of Women’s Suffrage Societies Scottish Women’s Hospital Units for Foreign Service (SWH).  On 28th August 1916, the Unit set sail (via Russia) for the Romanian Front, arriving in October 1916 just as the Romanian Army faced annihilation.

Her letters to her parents detail the harsh realities of nursing thousands of hideously wounded casualties in the most makeshift of conditions, packing up hospitals and retreating from the rapidly advancing Bulgarian and German Armies. She was awarded the Russian medal for meritorious conduct, the ‘Order of Service’.

Yvonne’s preserved scrapbooks and letters give insight into the courage and humour which endeared her to patients and colleagues and transformed her from a ‘socialite’ into a dedicated and respected member of an exceptional team of medical women.

There is more about the SWH in We Also Served: The Forgotten Women of the First World War, in Suffragism and the Great War and the You Tube presentation A Knighthood for Captain Tom, Why not VCs for women - volunteers and fundraisers 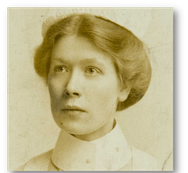 Trained in the tough environment of a Fever Hospital, Beatrice Hopkinson (b.1887) joined the Territorial Forces Nursing Service (TFNS) in 1914.  She served in Lincoln before being selected for overseas service.

Noted for calmness and courage when ‘under fire’ near St Omer, France, she was detailed to a Casualty Clearing Station (CCS) and subsequently given the rare honour of being trained for Rapid Response work.

Her wartime diary gives privileged insight into this new type of army nursing, the mental trauma of coping with endless streams of wounded men, and nursing in what she graphically describes as a ‘sea of blood’.

Having led the nurses’ procession at the Peace Celebrations in Charleroi, Belgium, Beatrice sailed to a new life in the USA as the wife of a doctor she had met whilst On Active Service.

A precious document in her luggage recorded “The Army Council’s Appreciation of the services rendered by her during the present war.”  She also received the British War and Victory medals.

Read more about the QAIMNS and the TFNS as well as Beatrice’s amazing recently discovered diary in Nursing Through Shot and Shell: A Great War Nurse’s Diary. She also features in the You Tube presentation We’ve Nursed Like This Before Improvisation and Dedication 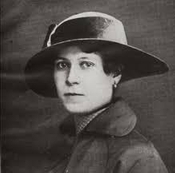 A medical student at Ghent University, Martha Cnockaert (1892-1966) was conscripted to work as a nurse in a German military hospital at Roulers/Roeselare when her native Belgium was invaded.

She was awarded the German Iron Cross for her service to casualties of the first German gas attack in April 1915.  Unbeknownst to her German paymasters, she was also acting as a spy for the British – her occupation as a nurse providing the perfect cover.

However, the Germans began to doubt her seeming loyalty to their cause and began to watch her.

Arrested in autumn 1916, her trial resulted in the passing of the death sentence, commuted to life imprisonment with hard labour, thanks to her Iron Cross but was liberated in November 1918 by the advancing British Army,

She was mentioned in General Haig’s 8th November Dispatch.  Decorated for bravery by the French and the Belgians, as well as receiving the British War and Victory medals, she is the only combatant whose gallantry was recognised by ‘both sides’ during World War One.

There is more about Martha in We Also Served: The Forgotten Women of the First World War and also on the You Tube Corona conspiracies and World War One women spies 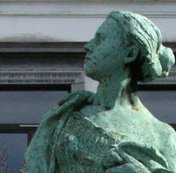 Belgian Gabrielle Petit, executed for spying 1916.
I have just been condemned to death. I will be shot tomorrow...and I will show them that a Belgian woman knows how to die